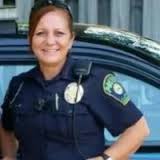 Sherry Hall had only been on the force for 3 months before she decided to lie, embarrass herself, and endanger every black man within a 50-mile radius. Sherry Hall, a police officer in Jackson, Ga., has been “charged with four felonies, including evidence tampering and giving false statements to investigators.